What are Soil transmitted Helminthiasis? 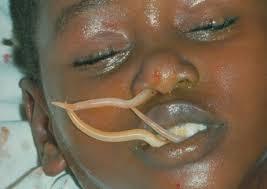 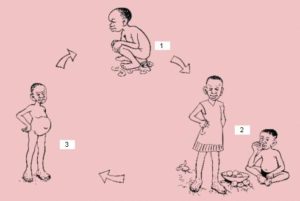 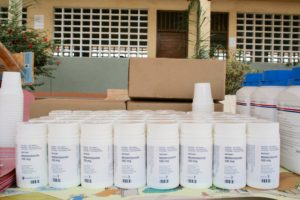 Roundworms are the most common human worm infections. There are currently about 1.2 billion people in the world who are affected. The parasite is mainly present in areas with poor sanitation and hygiene.Adult female worms can grow over 12 inches in length, although adult males are smaller. This adversely affects childhood growth, physical fitness and impairs intellectual and cognitive development.
Whipworms are another parasitic worm which causes Trichuriasis. It is transmitted by food or hands which have come in contact with soil contaminated with the parasite eggs. The eggs hatch in the small intestines but then attach to the large intestines causing blood and nutrients loss.
Hookworms are also a common infection with about 740 million people in the world being affected. The worm's larvae gets into the body through an opening in the skin after which it travels to the small intestine where it attaches to and begins feeding off the host. Hookworms are one of the main public health issues affecting maternal-child health.

More than 10million Cameroonians suffer from intestinal worms with school-aged children being the most affected and most vulnerable group. All regions in Cameroon are at risk of infection by intestinal worms.

These worms are mainly transmitted via contaminated soil. The soil gets contaminated by faeces containing helminths eggs and others get infected when they ingest the eggs from unwashed hands or food in the case of roundworms and whipworms, but by parasite larvae penetrating the skin in the case of hookworms. In infected people,the eggs and larvae grow into adults worms which then produce eggs in large quantities.

The main symptoms for these intestinal worms are ;

The most effective drugs for treatment of STH are Mebendazole or Albendazole which are all taken in a single dose. However, people can avoid being contaminated by;