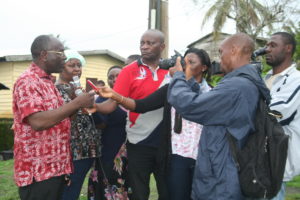 Prof L.A Tchuem Tchuente offers a clear picture of the realities of NTDs to journalists during field visit to Barombi Kotto in the South West Region.

In Cameroon, there continues to be a gap in media coverage as high focus is given to the big three – AIDS, tuberculosis and malaria while low visibility still lingers around neglected tropical diseases (NTDs) albeit the eminent burden caused by these diseases collectively. There has been an outburst of activity to try and reverse the neglect inflicted on NTDs and increase media coverage around these malaises.

The National Programme for the Control of Schistosomiasis and STH under the Ministry of Public Health organised a training workshop from the 23rd to 28th July 2016, for journalists from various media outlets in Cameroon. This 5-days training brought together journalists from both national and regional levels with the goal of raising awareness and strengthening NTDs reporting capacity within the media. The media outlets involved in this training consisted – CRTV, Cameroon Tribune, Le Jour, Le Messager, Mutations and La Nouvelle Expression.

This training consisted for most part, field visits to schistosomiasis transmission sites led by Professor Louis-Albert Tchuem Tchuente, renowned parasitologist and permanent secretary for the National Programme for the Control of Schistosomiasis and STH. NTDs affect people irrespective of their location- be it urban or rural areas. The field visits began in the capital city, Yaoundé, precisely at Dragage where it was visible for journalists to see that the content of some latrines built along running water from River Mpira, are released into this flowing water. Residents in the area use this water for laundry and bathing, which exposes them to infection with the parasite. Residents in the area are aware of the disease but due to poverty they can’t afford proper toilettes as compared to the badly built latrines they have as stated Mr Andre Pouthe a resident, “I am conscious that the position of my latrine is not appropriate but it is due to lack of funds. The children are not normally by the water. I have heard of bilharzia but I usually try to take precautions to protect my children”.

Similar sights were witnessed in Edea, Littoral region which is home to one of the rarest forms of the parasite in Cameroon, but interventions made by the national control programme have enabled the prevalence rate of schistosomiasis to decline to 5%. The director of the Edea health district, Dr Zacharie Bissemon stated that there are less and less cases being detected in the area thanks to health education, raising awareness in the community and regular deworming campaigns.

Day 4 of the workshop saw journalists visit Barombi Mbo, a semi island village 5km away from Kumba in the South West region. The villagers were used to using water from the lake to do their laundry and bath putting them at risk of infection. With the installation of public pumps, contact with the lake has been reduced so has the prevalence of the disease. The prevalence dropped from 62% in 2010 to 3% in 2016 thanks to years of incessant health education, sensitisation and social mobilisation carried out by the national control programme.

The situation is different to that at Barombi Kotto village, which consists an island and a continent. The island can only be accessed by canoe meaning the inhabitants are constantly in contact with water which perpetuates the issue of re-infection. Children who are most vulnerable, are in contact with the water about four times per day when they go to and from school on the continent. More so, the population on the island depends solely on the lake as their source of water as there is no public pump in the village as compared to neighbouring Barombi Mbo village. These factors are what continue to put the population at risk of contamination.

Albeit the challenges faced in trying to curb these diseases, schistosomiasis elimination is possible as witnessed in Kingding Njabi in the Centre region which stands as a success story in the elimination of schistosomiasis. In the 80s the community was greatly burdened by the disease as recalls one of the victims. He and other young children were used to swimming in contaminated water while ignoring the consequences of this act. This led to majority of the children developing abdominal pains, and diarrhea was frequent as well as blood in urine and stool.  Not knowing the cause of their discomfort most sort the help of traditional medicine which was to no avail. It was only after a few cases were detected and treated at the hospital that the community became aware of the disease and learnt how to prevent contamination.

Prof Tchuem Tchuente highlighted that elimination of schistosomiasis in the locality became a paramount goal for the national control programme. Through health education, social mobilisation, sensitisation, building of latrines in schools and installation of public pumps, the community was able to change their behaviour and improve their hygiene which all abetted in interrupting schistosomiasis transmission, leading to elimination. Surveillance studies carried out indicated that there has been no case of re-infection. The renowned parasitologist stressed that, for there to be no cases of re-infection, the population have to maintain good hygiene and limit contact with transmission sites such as those in neighbouring villages such as Makenene which is still battling schistosomiasis.

It is evident that the national control programme under the Ministry of Public Health has being making great strides to reduce the level of morbidity, mortality, and transmission of schistosomiasis so that it no longer is a public health problem in Cameroon. Prof Tchuem Tchuente is pleased with the fight the government and partners are carrying out as he strongly believes it is not a one-man fight rather, it requires collaboration from multiple actors both from national and international level. “Everybody at their level has to fight against this disease…it is important to have contribution from the population and communities because majority of these diseases are related in one way to poverty and in another way to lack of hygiene. Behavioural change by the population will allow for the elimination of this disease” Prof Tchuem Tchuente.

This successful workshop helped to raise the profile of NTDs in the media and journalists mentioned in feedback, their gratitude to the programme for organising the training session. They found it “rewarding” and quite “enlightening”. Chris Nche from CRTV radio station stated “I am satisfied because I have learnt a lot regarding bilharzia. It is true that I cover a lot of health related issues…and from what Cameroonians have learnt about the disease, they shall take measures to avoid infection”.

Following the workshop, journalists published articles around NTDs which helped to generate public awareness about NTDs, by providing information around the cause of NTDs, how they can be prevented and controlled. This shows the role the media can play in building momentum around NTDs control. By forming coalitions and working alongside both government and private partners from various sectors the issue of NTDs can be tackled. Please find below a link to one of the articles that were published.

Posted in Uncategorized and tagged Cameroon, journalists, media training, Neglected tropical diseases, schistosomiasis
← Evaluating the level of transmission of schistosomiasis and the efficacy of praziquantel treatmentMultidisciplinary research at the foothills of a live volcano →
Tweets by CountdownNTDCam